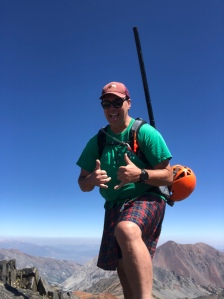 That’s right, I’m getting to the stretch to make Mountain Goat.  As of Nov 5 I am sitting on 841 points.  I’ve already set the date for Mountain Goat on a peak back east.   W4C/EM-003 (Hump Mountain) This mountain has special meaning from the childhood.  I have already booked my tickets for Martin Luther King Weekend.   I am thinking Sunday.  I’ll use Saturday to pick up any extra points needed on the way.   As much as this next part saddens me, so long as winter in the Sierra continues to be warm and dry, I am going to keep taking advantage of the open roads, and working those double peak days on drive ups or peaks with a < 1 mile hike.  Obviously not as fun as the 20 miles it takes for Pyramid peak, or a long overnight just to get to the launching point for a SOTA summit, but I am close so it is time to push on with a lot of efficiency.

The last time we spoke I had just finished some more Hope Valley peaks, since then I have done 216 points, and have been out almost every weekend.  Nothing to epic, although I did do 3 peaks on the same weekend I ran a half marathon.  That was interesting given the half was down in Joshua Tree, but all the peaks I did were up in the Whites.  Had a few other firsts, I went out on Grouse Ridge on a Friday night for the specific purpose of chasing and/or getting chased by VK/ZL land.  I had a contact with VK on SSB, I could hear a couple more, and almost had an S2S with VK.  No ZL calls came back to me.  That same night I did have a cross-mode SOTA contact with KB6B.  For those not sure what cross-mode is, I was operating SSB on an SSB frequency and this individual contacted me via cw.  I was able to get the data I needed for the contact.  On a different activation I was chased by someone from JP land as well, so I know have Asia, Australia and Europe for SOTA contacts.   I have also managed to go out with a few different activators, K6ARK for an activation, and KE6MT and I both also went out for a weekend.  Now that we are both involved with the leadership for W6 we did a lot of planning conversations while we were hiking and such.  The W6 ARM will be getting updated soon enough.

So, from this point, I have 8 weekends I can do SOTA to get the 149 points I need to be setup to push past 1000.  I only need 3×8 pointers, or 2×10 pointers per weekend to accomplish the task.  December 1 is the start of the +3 winter bonus for most of the regions I activate.  I’ve got most of the weekends filled up with which peaks, but somewhere in there I know it’s going to snow..Hopefully we get enough snow to make it possible to snowmobile come mid December, because that will open up a LOT of territory for me.   For now I will keep plugging along hitting the 8/10 pointers that I know I can get 2 – 4 peaks per weekend.   One of those weekend’s the Thanksgiving weekend I will head to the Crowley lake area; with that being a 3-5 day weekend I can snag  50+ points as there are quite a few peaks that have very short hikes to reach.  That weekend and the rest of Nov should help out with the goal.   The reason why I have put such a close timeline is I am heading to Australia in Feb, it will be my last trip with Jeremiah for ski week before he heads off to the Army next August, I did NOT want to make GOAT while on another continent, and since I knew which peak I wanted to do I wanted a three day weekend.   what’s yet another challenge?  Maybe I can get some more EU contacts that weekend.

So lets also discuss the SLOTH in the room.  No I’ve not hit Shack Sloth yet, however i am at 860 chaser points, so long as I do not go out of my way to chase, AND I get an S2S here and there along the way I can actually hit Sloth and Goat on my Hump mountain activation.  I’ll probably run my chaser points up to 995 leading into that weekend.  Hopefully someone is getting out that weekend somewhere to help me hit 1000 chaser points.  Apparently it has not been done yet either.  The funny thing is I was not even aware of how many chaser points I had, I was more into the S2S points, and just happened to notice how close my numbers were.  Those chaser points add up when you try and work S2S a lot.  I’ve had a few activations along the way where I did not post a single spot and just chased S2S.

I will update as time goes on to see how I am doing (even if only monthly).   Maybe toss out a quick note if there are some more epic outings etc.

Some images from the past couple of months. 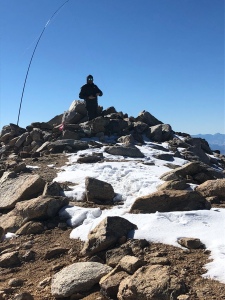 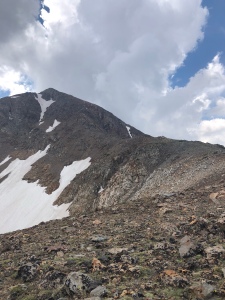 Love playing in the outdoors, Amateur Radio operator. Since I love hiking and bagging peaks, I picked up Summits on the Air back in 2015. Made Mountain Goat (and Shack Sloth) in early 2019. Also do Search and Rescue in the Tahoe Area. Work in the tech industry. View all posts by N6JFD

One thought on “The push for Mountain Goat, and other new happenings.”